St. Havel residence is located in the Old Town (first mentioned in 1091), 100 m from the heart of the Old Town – Old Town Square. The main entrance of the building is in a passageway between the streets Havelská and Kozna. This is a nice alley with a few shops and a restaurant. In the Old Town you'll find a labyrinth of narrow streets and squares with small Gothic and Romanesque churches spread around the entire Old Town. Within a few steps, you will be surrounded by restaurants, shops, bars, exhibitions, all in beautiful antique buildings and everywhere you can get on foot (you don´t need to use car, taxi or public transport).

The spacious Old Town Square has been the scene of the most important events in the history of Prague. It is surrounded by beautiful pastel-coloured buildings in Romanesque and Gothic style with fascinating decorations. Today, the Old Town Square offers visitors the spectacular view of the Astronomical Clock, the churches of St Nicholas and Our Lady before Tyn, Jan Hus' statue; also a large selection of restaurants, cafés, shops and galleries. The Church of Our Lady before Tyn

was the main Hussite church in Prague and it dominates the Old Town Square with its impressive spires. A beautiful entrance portal decorated with scenes of Christ’s passion and a huge Rococo altar on the northern wall are some of its most interesting features. The interior was reconstructed in the Baroque style in late 17 century.

was established in the 14th century as a symbol of autonomy, after the agreement of King John of Luxemburg to set up a town council. Several old houses were incorporated over the centuries as the Old Town Hall expanded. A Gothic chapel and a neo-Gothic north wing were destroyed by the Nazis in the spring of 1945, but now the chapel has been reconstructed. The most famous part of the tower is the Town Hall Clock, dating from the 15th century. It consists of three parts – the procession of Apostles, the astronomical clock and the calendar, and the hourly procession of the 12 Apostles is its most spectacular feature. 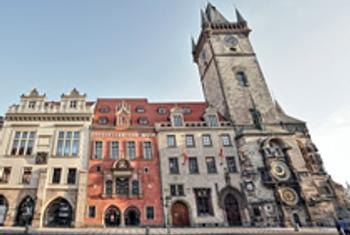 Carolinum is the oldest preserved university building in Prague. Thus even today it is of extraordinary importance within the Charles University, as a rector’s seat and ceremonious meeting place. In the Carolinum auditorium numerous outstanding personalities were given the honorary doctorates. 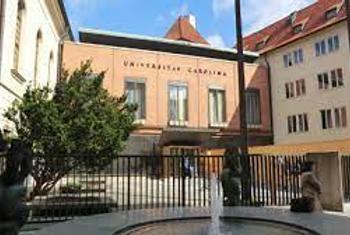 One of the oldest European theatres, operating continuously since 1783. You can see there Opera, Drama and Ballet performances. The Estates Theatre is one of the most beautiful historic theatre buildings in Europe. Its construction was initiated by the enlightened aristocrat František Antonín Count Nostitz Rieneck, led by the desire to aggrandise his native city as well as the souls of its inhabitants. St. Havel Church (next to our residence)

The Church of St Havel, established by Wenceslas I in 1232, was one of only four main churches in Prague at the time. Its current Baroque façade was built between 1723 and 1738. The church is home to very valuable and nearly complete Baroque furnishings and many significant works of art, including the famous “Calvary” by Ferdinand Brokoff. Among the notables interred at the church is the important Bohemian Early Baroque painter Karel Skreta. 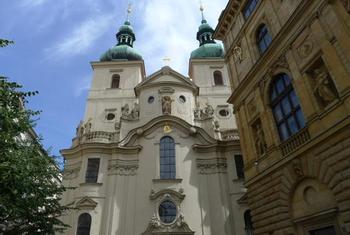 Charles Bridge is on the top of every Prague visitor's must-see list. It is also popular with Czech artists, musicians and souvenir vendors whose stands line both sides of the bridge year-round. A great time of day to come to the bridge is at sunset when one can enjoy a breathtaking view of the fully lit Prague Castle against the evening sky. Charles Bridge is a stone Gothic bridge that connects the Old Town and Lesser Town (Mala Strana). It was actually called the Stone Bridge (Kamenny most) during its first several centuries. Its construction was commissioned by Czech king and Holy Roman Emperor Charles IV and began in 1357. Prague castle (30 min walk) - Getting There on Foot

If you would like to walk, you have several options:

Nerudova Street - walk up the picturesque (and quite steep) Nerudova street from Malostranské náměstí and at the top take a sharp right onto Ke Hradu. You will end up in front of the main entrance to the Castle.

Castle Steps (Zamecke schody) - start up Nerudova from Malostranské náměstí and take a quick right onto Zámecká street. Then turn left to climb the romantic Castle Stairs, which will take you to the Garden on the Ramparts (Zahrada na Valech).

Old Castle Steps (Stare zamecke schody) - the stairs start near the Malostranská metro station and will put you at the beginning of Jiřská street. You will be rewarded with one of the most beautiful views of Prague. Prague has a rich and varied nightlife that can offer the right type of entertainment to almost anyone. While pubs and restaurants are typically closed by midnight, many bars and clubs remain open and hopping until early morning hours. You can dance all night at one of Prague's many discos and music clubs, have a cocktail or beer at a bar, and enjoy live music of all kinds, most of them ar up to 10 min on foot from our residence.